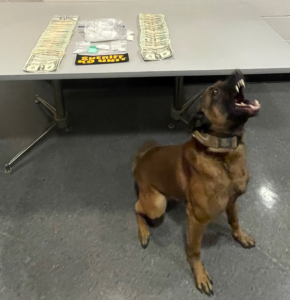 During the late night hours of December 8th 2021, while conducting criminal interdiction, a Guernsey County Sheriff’s Office detective observed what appeared to be an illegal narcotics transaction take place. The Guernsey County Detective reported to have seen a male occupant in two separate vehicles while at an East Wheeling Ave business.  Upon observing the suspicious behavior, the detective then contacted additional deputies to assist him at this time. As a result of a traffic stop that was conducted on I-77 and contact was made with a female at an East Wheeling Ave business. After having conducted the traffic stop on I-77, a large amount of currency was located. Once the large amount of currency was located an open air sniff using GCSO K-9 Hoke was utilized on a second vehicle. During the open air sniff it was reported K-9 Hoke gave a positive indication on the second vehicle.

A probable cause search was conducted on the second vehicle. Ultimately, upwards of a pound of suspected methamphetamines and suspected fentanyl was located. The suspected illegal drugs have an estimated street value of $25,000. Two male subjects and one female subject were then taken in custody. The filing of formal charges is pending further investigation by Guernsey County Sheriff’s Office Detectives.

Sheriff Jeffrey Paden commended Detective Cory May and Deputy Shayne Leggett on their efforts and perseverance in combatting drug trafficking going on in Guernsey County.