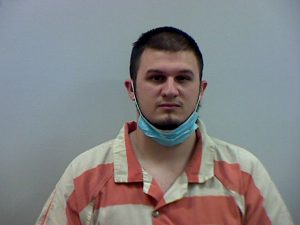 Sheriff Jeffrey D. Paden announced Friday October 9th that his Investigators have charged Mark Allen Anthony Lehner, age 22 of New Concord with one count of Rape, a felony of the first degree. Sheriff Paden said that an investigation was launched on Monday morning shortly after 8 am after a woman had reported that she had just been sexually assaulted by a male acquaintance at his Western Guernsey County home. Investigators worked throughout the week conducting interviews, gathering evidence and following an interview with Lehner on Thursday morning , Investigators developed enough probable cause to charge Lehner with Rape.

Lehner is currently being held in the county jail and will be arraigned at the Cambridge Municipal Court on a bond hearing October 9th at 2pm.

We use cookies on our website to give you the most relevant experience by remembering your preferences and repeat visits. By clicking “Accept”, you consent to the use of ALL the cookies.
Cookie settingsACCEPT
Manage consent

This website uses cookies to improve your experience while you navigate through the website. Out of these, the cookies that are categorized as necessary are stored on your browser as they are essential for the working of basic functionalities of the website. We also use third-party cookies that help us analyze and understand how you use this website. These cookies will be stored in your browser only with your consent. You also have the option to opt-out of these cookies. But opting out of some of these cookies may affect your browsing experience.
Necessary Always Enabled

Performance cookies are used to understand and analyze the key performance indexes of the website which helps in delivering a better user experience for the visitors.

Analytical cookies are used to understand how visitors interact with the website. These cookies help provide information on metrics the number of visitors, bounce rate, traffic source, etc.

Advertisement cookies are used to provide visitors with relevant ads and marketing campaigns. These cookies track visitors across websites and collect information to provide customized ads.

Other uncategorized cookies are those that are being analyzed and have not been classified into a category as yet.

SAVE & ACCEPT
Back to Login