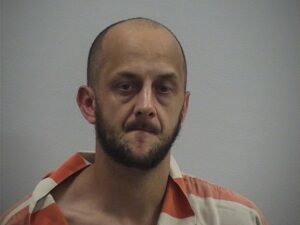 A 38 year old Cambridge man is in custody at the Guernsey County Jail following his arrest by CODE task Force investigators from the Guernsey County Sheriff’s Office on Thursday afternoon May 26, 20022. Sheriff Jeffrey D. Paden says that his detectives were conducting surveillance on a residence that his office had received complaints on regarding suspected drug activity, when the investigators observed what appeared to be a hand- to –hand transaction between Thomas L.K. Harding Sr. and a female driver of a vehicle.

Detectives then notified a Cambridge Police Officer and requested that the officer conduct a traffic stop on the vehicle. The vehicle was stopped and upon speaking to the female driver, she readily turned over suspected methamphetamine to the officer and confirmed that she in fact had just purchased the narcotics from Harding Sr.

At that time detectives made contact with Harding Sr., and took him into custody. Upon search incident to arrest, Detectives recovered a large amount of suspected methamphetamine and suspected fentanyl as well as an undisclosed amount of cash on his person.

Harding Sr. was then transported to the county jail and later interviewed by investigators and reportedly confessed to selling the narcotics to the female. Sheriff Paden added that the transaction occurred within 1,000 feet of a school zone.

Sheriff Paden praised the detectives stating “This is what happens when officers are proactive. This was text book detective work and due to the alertness and thoroughness of these men, and the continued help and support of our citizens, we are putting these drug dealers where they belong….. Behind bars!!”

Harding Sr. has been charged with Aggravated Trafficking in Drugs and Aggravated Possession of Drugs, both 2nd degree felonies. Harding will have a bond hearing in the Cambridge Municipal Court on Tuesday May 31, 2022.