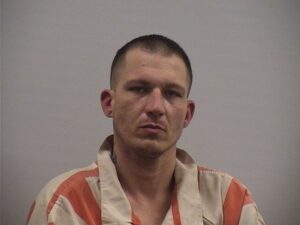 Sheriff Jeff Paden announced today that an arrest has been made in connection to a death that Guernsey County Sheriff’s Office Deputies as well as Investigators from the Sheriff’s Office responded to in the early morning hours on Monday January 24th.

Deputies initially responded to a Meadowbrook Dr. residence in Byesville, Ohio in reference to male calling 911 and advising that a female was deceased at the residence.  Deputies responded to the residence and were not able to get an answer at the door. Responding deputies made entry to the residence at this time to find a 29 year old female deceased inside. Guernsey County Detectives were then summoned to the scene to begin an investigation.

During the investigation, Detectives learned that the male 911 caller had used another alias, as the male identified himself as male that was incarcerated at the time of the 911 call. With Guernsey County’s newly enhanced 911 system, Dispatchers were able to get a location of where the 911 call was made from, although it was a deactivated phone.

Detectives were able to follow up on this information and able to obtain video surveillance footage of the male making the 911 call. This male was identified as 36 year old Timothy Lee Larrick, age 36 of Cambridge, Ohio. Detectives later learned that Larrick is a family member of the decedent. Detectives were able to locate Larrick and he was later questioned at the Guernsey County Sheriff’s Office. Larrick admitted to being with and discovering the deceased female at around 2:00pmon Sunday January 23rd, and immediately leaving after discovering that she was deceased. Larrick, admittedly, did not call 911 until the following day at around 6:35am, then using an alias. Larrick was charged with Failure to Report a Death and Obstructing Official Business. Larrick was placed under arrest following the detective’s interview with him. Larrick is scheduled to appear in the Cambridge Municipal Court on these charges. Investigators continue to work with the Guernsey County Corners Office as well as the Guernsey County Prosecutors Office and further charges are expected to be brought against Larrick once this case is presented to the Grand Jury.

Sheriff Paden reminds residents that Ohio has a “911 Good Samaritan Law” that grants immunity to someone who calls for medical assistance for someone that they believed has suffered an overdose. This law grants immunity from prosecution, conviction or penalization for minor drug offenses. Sheriff Paden reiterates, if you suspect someone you are with is suffering or suffered from a drug overdose, call 911.