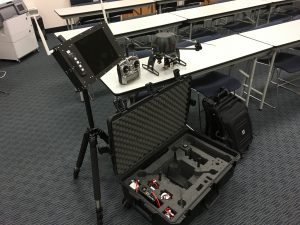 The Aviation Unit was officially created on April 6, 2016 by receiving authority granted by the Federal Aviation Administration (FAA) to fly its Unmanned Aerial System (UAS) in the National Airspace System. The UAS was purchased from a manufacturer in Denver, Colorado and is known on the market as the RDASS 1000. Drug forfeiture money was utilized to purchase the UAS.

The UAS has the capability of live HD video transmitted to any ground source. The UAS also has FLIR (thermal imaging) for use at night or low level light flights. Both video and thermal imaging can be recorded for evidence or documentation. The UAS has full autonomous flight capability and can be flown without any downtime because of high output charging system and multiple batteries.

The Aviation Unit is currently a four man team which are all licensed to fly the UAS by the FAA. Strict compliance of FAA rules and regulations are maintained during every flight. The UAS is registered as an aircraft with the FAA the same as every other small personal plane or commercial jetliner.