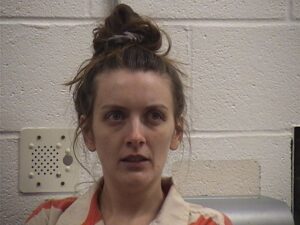 Sheriff Jeffrey D. Paden said that Chelsie Perry, age 30 of Cambridge has been charged with Corrupting Another with Drugs, a felony of the fourth degree, Endangering Children , a felony of the third degree, and Permitting Drug Abuse, a felony of the fifth degree. Deputies responded to Perry’s residence on Cadiz Rd. to conduct a welfare check on her 4-year child after receiving reports of drug abuse and child neglect. Deputies arrived at the home and were able to speak with Perry as well as the child. Deputies noted concerns over the child’s appearance. Perry reportedly admitted to deputies that she had provided her 4-year-old child two different illicit narcotics and allowed the child to consume these drugs. Perry also reportedly told deputies that some of the illicit narcotics were still inside the residence, but denied them permission to enter the residence. Detectives from the Sheriff’s Office Investigations Division, as well as case workers from the Guernsey County Children Services were contacted and responded to the scene.

Guernsey County Children Services determined that they needed to take emergency custody of the child following their preliminary assessment. Sheriff’s Detectives then prepared and applied for a search warrant for the home which was granted. During the search of the home, detectives located and seized narcotics and other evidence from the home and investigators also noted that the condition of the home and lack of food inside the residence was not suitable for a child.

Perry remains incarcerated at the Guernsey County Jail at this time awaiting a bond hearing. This case remains under investigation and more charges are expected to be presented to a grand jury. Sheriff Paden praised his Deputies and Detectives for the swift and thorough investigation that lead to this child being removed from the harmful and potentially deadly environment.