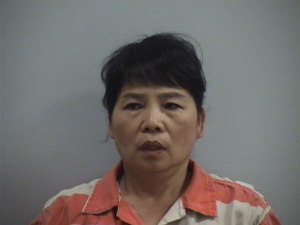 Sheriff Jeffrey D. Paden has announced that on October 26, 2022, Deputies, and Detectives from his office, along with Homeland Security Investigations, and the State Medical Board of Ohio executed a search warrant at Sophie’s Relax Massage on Southgate Parkway. Sheriff Paden said Yinqin LI, age 58 of China, has been charged with two counts of Promoting Prostitution, felonies of the fourth degree. Sheriff Paden said the joint investigation between Special Agents from Homeland Security Investigations, Investigators from the State Medical Board of Ohio, and Detectives with his Investigations Division began in August of this year and culminated with the arrest of LI. This investigation spanned to other counties and states to include Washington County, OH and Parkersburg, WV.  LI is currently in the county jail awaiting a hearing at the Guernsey County Common Pleas Court.

Two individuals were charged with Prostitution by the Parkersburg Police Department, and it was arranged for Human Trafficking victims to return to their families.

Numerous local individuals have been identified frequenting these illicit massage businesses. This investigation is ongoing and additional charges are expected.

Sheriff Paden would like to thank those individuals in the community that came forward about the activities happening at these businesses.